Managed memory greatly simplifies programming GPUs and Intel Xeon Phi coprocessors (when used in offload mode) because data can be utilized on either the host or the device without having to perform explicit device transfers. Instead the device(s) and host interact through the device driver to transparently migrate data as needed. As a result, application codes tend to be simpler while performance analysis tends to be more complex because of the hidden nature of managed memory data transfers. In particular, the application memory access pattern is critical to performance. 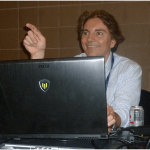 Rob Farber at his SC14 tutorial

A key advantage of offload mode for GPUs and Intel Xeon Phi is that the programmer can take full advantage of the serial processing speed of the host processor. Modern multicore processors have been designed to run serial codes as fast as possible. Parallel regions of code can then be “offloaded” to the massively parallel device. Managed memory can also be a tremendous aid when porting legacy codes, because individual parallel kernels can be developed and tested for corrected without major source code modification.

The following example shows how to allocate and uses the CUDA Thrust API with GPU managed memory. Thrust provides STL-like C++ functionality. In this example,  cudaMallocManaged is used to create a managed region of memory while  thrust::device_ptr<int> is used to turn the device pointer into a pointer usable by Thrust.

Warning! Don’t confuse CUDA’s Managed Memory with Mapped Memory because there is a huge performance difference between the two. Mapped Memory does not cache memory on the device so it always performs a PCIe transfer to fetch and update host memory on each GPU memory operation. This can cause a huge number of PCIe data transfers to occur for anything except purely read-once or write-once memory access patterns. Managed Memory is much more efficient because it is designed to keep blocks of memory on the GPU throughout the life of the CUDA kernel.

Simple example showing how to use Managed Memory with Thrust
C++

TechEnablement also provided a simple use of shared memory (Intel’s version of managed memory not to be confused with GPU shared memory) through the use of Cilk and the _Offload_shared_malloc memory allocator “Shared Memory is Simple on Intel Xeon Phi – supports STL!“.

A big difference is that the Intel Xeon Phi code can utilize OpenMP for the reduction while the GPU example requires the use of the Thrust reduction call  thrust::reduce.